SAILING to the Red Wall

Two weeks ago on a Saturday afternoon after several snags, snafus and sidetracks I was finally able to deliver six large prints to Once Upon A Paintbrush, the gallery in Bryan Ohio that is featuring my work in a show that officially starts October 5, 6-9 PM. That day I also made some promotional images for the gallery and show. 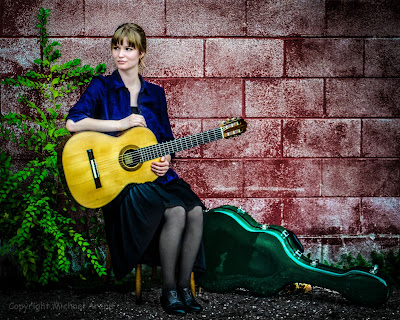 Before the shoot, we were caught in one more snag, there was one print for the show that hangs vertically. When we unwrapped it, and turned it over it was set up to be hung horizontally. Ouch it needed to go back to the framer (who at this point I will not name) in Ft Wayne Indiana.

On Sunday, the print took a trip to the framer, and then back to the gallery, problem solved! When I arrived Cassandra (the owner) was at her easel working on a commissioned piece and talking Jennifer, one of the musicians that will provide music at the show opening. Jennifer plays Classical Guitar, and I noticed that she had a cool, jade green, form fitting case for her instrument. We rechecked the print one more time, and talked about the piece that Cassandra was working on. Then it was time for me to get going, or so I thought. Well I did leave, at least for a few minutes. As I drove away, I spotted a burgundy colored wall about a block from the gallery... 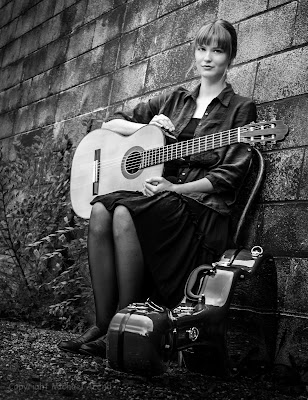 It was Shoot Where You Are Time!

My mind is always going, making connections, imagining things. So I pulled into a little parking lot by the wall and looked around for a couple of minutes. Hmm, cool green case, burgundy wall, little green tree growing against the wall ( it may have been a big weed ) and of course the musician. Back to the gallery I went at a good clip. Cassandra and Jennifer looked at me a little funny when I walked back inside. Then I told then about the wall and asked to borrow Jennifer, her guitar and case, oh and one of the chairs from the gallery. They thought it was a great idea. Maybe Jennifer didn't feel comfortable driving over with this nut that she had just met, so while I loaded the chair into my vehicle she started walking the short block to the wall. I was about a minute ahead of her so I set the chair along the wall and had Jennifer sit down with her guitar while I set the green case in position and let my imagination show me where I might go. It was fun, and about 300 shots later Jennifer was walking back as I loaded my gear and the chair for the 32 second ride back to the gallery. I dropped the chair off, thanked them both and really left this time.

So now it's time to explain the title of this post, Sailing to the Red Wall. Shooting where you are is easier when you practice a few basic habits.

Now you know how to sail to the red wall.